Choose from a range of weaponry and bring rebellion to the Underhive with this Corpse Grinder Cult! Customise your gang using multiple poses, heads, accessories and more.

The Corpse Grinder Cult consist of chaos cults which are full of gangs devoted to the Chaos God Khorne. They are active in the hive cities and plot to overthrow the Imperium of Man. The power hungry cults survive on forbidden flesh and will emerge from their hidden corners, chanting as they bring rebellion to the world of Necromunda.

Warhammer 40k Necromunda is a tabletop war game where players will control rival gangs in the Underhive. Produced by Games Workshop, Necromunda is a place of violence found in the depths beneath the Hive City. Similar to Warhammer 40,000, the game plays using 28 mm miniatures and terrain which can be assembled, painted and collected for future battles!

This set contains the components to build 10 Corpse Grinder Cultists. There is also the option to assemble a Butcher (the leader) and a Cutter (the champions). Personalise your army and prime them ready for battle using a range of paints, accessories, weaponry, poses and more!

Find the rules for the Corpse Grinder Cult Gang in the Necromunda: Dark Uprising and Necromunda: The Book of Ruin. 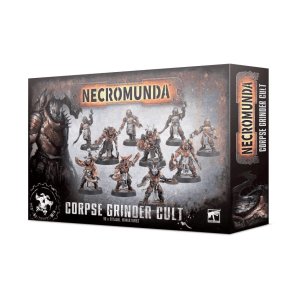 You're viewing: Corpse Grinder Cult Gang (Necromunda) £20.64
Add to basket
We use cookies on our website to give you the most relevant experience by remembering your preferences and repeat visits. By clicking “Accept”, you consent to the use of ALL the cookies.
Cookie settingsACCEPT
Manage consent