Have you ever wondered what it would be like to combine charades and Pictionary? In the Concept Boardgame you compete in two teams using nothing but icons and cubes!

The Concept Boardgame begins by drawing card that lists concepts in descending order from easier to more difficult. 4-12 Players aged 10 years and over will work in teams of two to get players to guess words or phrases of your choice.

With only the use of cubes, question marks and exclamation points you need to describe the concept you have chosen to the opposing team. For example, an easy concept would be ‘milk’. The team are restricted to the word yes, so pay attention when they are placing their cubes/pawns. To describe ‘milk’ the team will place their question marks on the liquid icon and their matching cubes on the drink, white colour icons and so on.

Concept Boardgame also has more complicated concepts. If you have chosen to describe ‘Leonardo DiCaprio’ you would place your question mark on the relevant icon. The matching cubes will placed on icons which give clues to movies he has been in. For example, you could place a cube on the image of a ship in reference to the Titanic. Points will be rewarded to correct guesses and good clues. The team with the most points at the end of the game will become the winners!

Lasting around 40 minutes per game, Concept Boardgame is extremely easy to play and learn. Just follow our steps below to get start:

Be the first to review “Concept Boardgame” Cancel reply 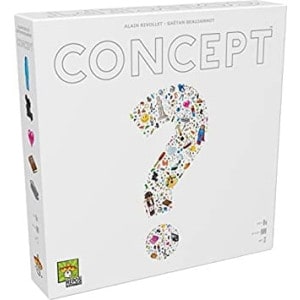 You're viewing: Concept Boardgame £18.50
Add to basket
We use cookies on our website to give you the most relevant experience by remembering your preferences and repeat visits. By clicking “Accept”, you consent to the use of ALL the cookies.
Cookie settingsACCEPT
Manage consent