If ruling technological supremacy and fielding a flexible force appeals to you, then T’au Empire Combat Patrol is perfect for you. Start your brand new or expand your existing force with this incredible box set. Contains nearly 25 power level’s worth of units, ideal for any Combat Patrol sized games of Warhammer 40,000!

The T’au Empire are in a desperate race to spread their philosophy of the Greater Good to the empire. If any try to resist, the T’au will bring their technological might in the form of long-ranged weaponry, aeroplanes, tanks, and their highly adaptable battlesuits. They use speed and tactics to conquer and continue their development at incredible rates. The Warhammer 40k Tau Empire are divided into Fire, Air, Water, Earth and Ethereal castes. All of which work towards the same goal of expansion and colonising new worlds. 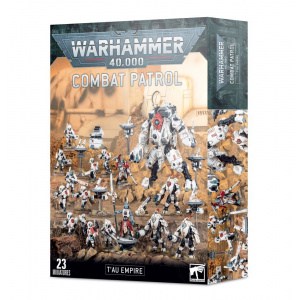 You're viewing: T’au Empire Combat Patrol £67.49
Add to basket
We use cookies on our website to give you the most relevant experience by remembering your preferences and repeat visits. By clicking “Accept”, you consent to the use of ALL the cookies.
Cookie settingsACCEPT
Manage consent