If you would rather hunt Daemons than make pacts with them, then this Grey Knights Combat Patrol is perfect for you. The Terminators are able to provide a sturdy core to your army and the Dreadknights slice things up with their Nemesis greatsword or by smashing them with a Nemesis daemon hammer!

Hunt down your daemonic enemies of the Imperium with this Grey Knights Combat Patrol! The contents of this box set have been chosen to provide you with a force ideal for your Combat Patrol-sized games with approximately 25 Power Level’s worth of models.

The most mysterious of all the Emperor’s servants, the Grey Knights are a Chapter of the Space Marines. Each warrior is clad in sigil-scribed power armour and wields archaic weapons through which they are able to channel otherworldly abilities. Guided by powerful Librarians, the Strike Squads  can teleport onto the battlefield, supported by psychic warriors clad in Terminator armour and heavily-armed Nemesis Dreadknights.

We highly recommend using the Citadel Plastic Glue and Colour System to assemble and decorate your new miniatures. Discover the wide variety of Citadel paints, designed specifically for Warhammer painting, and pick out your favourites! Once Primed and ready, introduce them to your future battles! 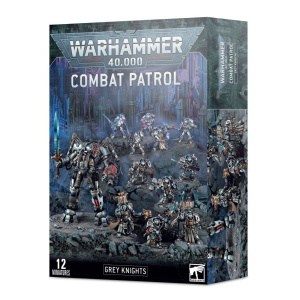 You're viewing: Grey Knights Combat Patrol £71.46
Add to basket
We use cookies on our website to give you the most relevant experience by remembering your preferences and repeat visits. By clicking “Accept”, you consent to the use of ALL the cookies.
Cookie settingsACCEPT
Manage consent