It’s 10am on the 11th of July,1899 and gunfire can be heard as heavily armed bandits rob the innocent. Players must compete to become the richest outlaw by shooting and fighting other bandits during the hunt for money. Will you succeed in stealing the suitcase full of cash?

Colt Express is a card-driven board game where 2-6 players aged 10 years and over will compete for money. Play a bandit that must go up against others as you all attempt to rob the train for the suitcase which holds the weekly pay of the Nice Valley Coal Company.

The game is set on a 3D train in which bandits will have to run between each car, all packed full of gems and bags of loot. Each character will have a special power to help them progress throughout the game. For example, one special power is gaining a bag of loot when you punch someone.

When the game ends the player that fired the most bullets will receive a bonus and the richest player will win the game!

Find a simplified version of how to play Colt Express below:

Find the full list of game components for Colt Express below:

Be the first to review “Colt Express” Cancel reply 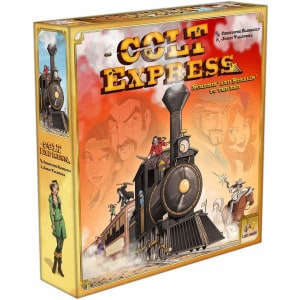 You're viewing: Colt Express £20.75
Add to basket
We use cookies on our website to give you the most relevant experience by remembering your preferences and repeat visits. By clicking “Accept”, you consent to the use of ALL the cookies.
Cookie settingsACCEPT
Manage consent