Are you a fan of Colourbrain? If so, we are happy to introduce to you Colourbrain Mini Board Game that contains 120 brand new questions!

Coloubrain Mini Game invites you to gather your colours and participate in some quality entertainment.  Once again you can bring 2+ players aged 14 and above to split up into the teams of your choosing. This Mini version of Colourbrain can be used either as an expansion pack to the original game or be played entirely on its own as a travel game. Using your 11 different colours, answer the question from the pile in the middle of the playing area and score yourself a point for every team that gets the question wrong.

If a team go into the lead you can slow them down by paying a colour capture card! This card can only be played once and only against the team in the lead, so use it wisely. The number on your colour capture card reveals how many cards you can blindly pick from the team in the lead. This team will then have to play the next round without these cards before they get them back.

Below is a simplified set of steps to play the Colourbrain Mini Game:

How to play Colourbrain Mini

Be the first to review “Colourbrain Mini” Cancel reply 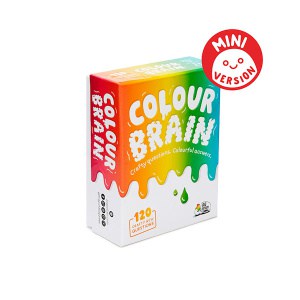 You're viewing: Colourbrain Mini £8.75
Add to basket
We use cookies on our website to give you the most relevant experience by remembering your preferences and repeat visits. By clicking “Accept”, you consent to the use of ALL the cookies.
Cookie settingsACCEPT
Manage consent