Warhammer 40k Deathwatch Codex Supplement is the definitive book for fans of the Space Marine chapter. Containing datasheets, stratagems, warlord trains and so much more!

This Deathwatch Codex Supplement is a 64-page hardback codex that provides all you need to know in order to unleash the Deathwatch during battle. Browse through the latest rules and incredible art to inspire your unique Deathwatch collection. Standing proud in their armour, they publicly display their service to the emperor and will seek out any threat to the Imperium and destroy it.

Warhammer 40k Deathwatch are a Chapter of Space Marines and are considered to be the Imperium’s greatest weapon against the xenos races. The Deathwatch will carefully despatch the selected operatives to find and exterminate the enemy alien presences. Each one of these post-human warriors are veterans of many battles and only the highest skilled xenos-hunters are awarded this honour. Amongst their battle-brothers they will learn both tactics and strategies in order to slay the alien races. The elite force are equipped with a variety of unusual weapons and wargear that has been developed to cut down their enemies. These black-armoured hunters are filled with hatred against the xenos and will not rest until they are gone.

Find the full list of contents for Deathwatch Codex Supplement below:

Be the first to review “Deathwatch Codex Supplement” Cancel reply 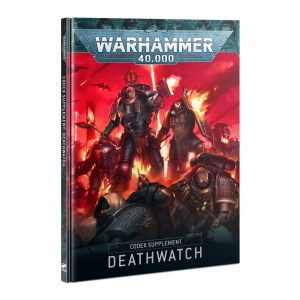 You're viewing: Deathwatch Codex Supplement £16.13
Add to basket
We use cookies on our website to give you the most relevant experience by remembering your preferences and repeat visits. By clicking “Accept”, you consent to the use of ALL the cookies.
Cookie settingsACCEPT
Manage consent