This Astra Militarum Codex contains a wealth of information such as background details, making this 114-page hardback the definitive book for Astra Militarum collectors!

Warhammer 40k Astra Militarum, also referred to as the Imperial Guard ue their overwhelming numbers and strategy to defeat the enemies of the Imperium. Consisting of countless billions of both men and women, their soldiers serve as the first line of defence for the Imperium. They stand defiant against any myriad threats to the existence of the human race. For ten thousand years the force has bravely sacrificied their lives beating overwhelming odds in the fight for humanity.

Be the first to review “Astra Militarum Codex” Cancel reply 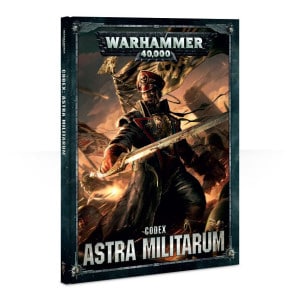 You're viewing: Astra Militarum Codex £19.95
Add to basket
We use cookies on our website to give you the most relevant experience by remembering your preferences and repeat visits. By clicking “Accept”, you consent to the use of ALL the cookies.
Cookie settingsACCEPT
Manage consent