Codenames: Pictures is a follow up from the original Codenames. As you could have guessed, this time we are playing with pictures rather than words!

Codenames: Pictures requires 2 teams with 2-8 players. The spies will have to work out one-worded clues given by the spy master which represent the images displayed. The spies must try to correctly find their agents by carefully choosing where they think they are located. Be careful, as behind one of the locations is the assassin which will immediately end the game and declare the opposing team as winners.

Codenames: Pictures is recommended for players aged 10 and over with 15 minutes to spare per game. Work together as spies to contact agents and claim victory. This version has been made suitable for younger players to participate by introducing pictures instead of words. For example, there is pictures of animals and teddy bears to keep the children intrigued. So, now the whole family can get guessing and find all agents to win the game!

Find the instructions for Codenames: Pictures below:

Be the first to review “Codenames: Pictures” Cancel reply 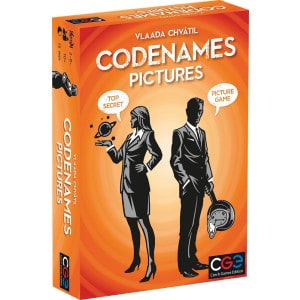 You're viewing: Codenames: Pictures £11.36
Add to basket
We use cookies on our website to give you the most relevant experience by remembering your preferences and repeat visits. By clicking “Accept”, you consent to the use of ALL the cookies.
Cookie settingsACCEPT
Manage consent