Codenames have combined with the Marvel Universe to bring extra entertainment to your game nights. Featuring Spider Man, The Avengers, Guardians of the Galaxy and so much more!

Codenames Marvel is a great party game for 2-8 players aged 8 years and over. The chosen spymaster of each team will have to make up clues to match the words they have been given. These words are all visible to players in a 5×5 grid, they just don’t know which ones. Two teams will have to compete and be the first to guess the clues given by their spymaster to win.

Players need to guess carefully as they must avoid choosing the other teams clues and the hidden assassin which will immediately end the game. However, they also have a limited number of guess and wrong answers so the entertainment never stops. Not only is this game fun to play but it’s incredibly easily to learn, perfect for all Marvel fans. The first team to identify all the correct cards belonging to the spymaster will win Codenames Marvel!

A simplified version on how to play Codenames Marvel will be found below:

Below is a full list of game components for Codenames Marvel:

Be the first to review “Codenames Marvel” Cancel reply 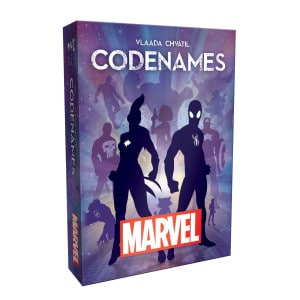 You're viewing: Codenames Marvel £17.62
Add to basket
We use cookies on our website to give you the most relevant experience by remembering your preferences and repeat visits. By clicking “Accept”, you consent to the use of ALL the cookies.
Cookie settingsACCEPT
Manage consent