Play local citizens and impress the monarchy by building a medieval city fit for a king. This edition of Citadels features a new cast of nine characters and new districts!

Citadels is a family board game for 2-8 players aged 10 years and over. Lasting roughly 60 minutes a game, players will start with a number of building cards with their hand to begin the game. Buildings come in five different colours and abilities when playing different characters.

Each character will have a special ability that can be used once during their turn. The usefulness of these abilities will depend on your situation in the game. Examples of characters are assassins, thieves, wizards and warlords. All characters will be able to carry out different actions, an example of this would be the thief stealing gold from other players.

Citadels will end when the round finishes and a player has their eighth building. All players will then tally up their points, the player with the highest amount wins!

Brief overview of how to play, we also recommend watching the video below:

Components for the game are listed below:

How to Play Citadels

Be the first to review “Citadels Revised Edition” Cancel reply 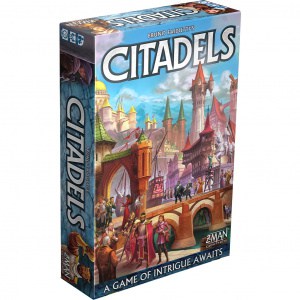 You're viewing: Citadels Revised Edition £19.95
Add to basket
We use cookies on our website to give you the most relevant experience by remembering your preferences and repeat visits. By clicking “Accept”, you consent to the use of ALL the cookies.
Cookie settingsACCEPT
Manage consent