Add to your Blood Angels chapter with this Chaplain with Jump Pack kit! Including the single-pose miniature, inferno pistol, citadel base and more.

This Chaplain with Jump Pack kit contains all the necessary components to assemble the single-pose miniature. Armed with an Inferno Pistol, a Crozius and the tread of his boots which features a Blood Angels symbol this miniature will easily trample on foes!

The leaders of the Chapter roar proudly into battle wearing their jet-black armour which is covered in grim portents of death. Chaplains are known to be a terrifying icon of the Space Marines and are feared by all who encounter them. They must constantly watch out for signs of the Black Rage and decide who will successfully lead them into battle. This miniature wears a jump pack and is eager to leap into the heart of the foe.

Warhammer 40k Blood Angels are well known for being one of the First Founding Legions of the original Space Marines. They have a much feared reputation for being bloodthirsty during their battles and the ancient chapter now suffers the threat of extinction. They must now gather more numbers to replenish their losses. We recommend using the Citadel Colour System to bring the aggressive Blood Angles miniatures to life. Choose from a huge range of vibrant paints which have all been designed specifically for Warhammer painting and get creative. When primed and ready, let the battle commence in Warhammer 40k! 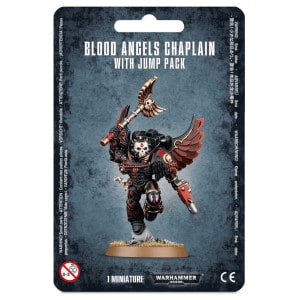 You're viewing: Chaplain With Jump Pack (Blood Angels) £15.88
Add to basket
We use cookies on our website to give you the most relevant experience by remembering your preferences and repeat visits. By clicking “Accept”, you consent to the use of ALL the cookies.
Cookie settingsACCEPT
Manage consent