This kit contains all the components to assemble five Possessed Chaos Space Marines. Including Multi-Part Plastic Components and the option to assemble a Champion!

This kit contains all the components required to assemble five Possessed Chaos Space Marines. Some Chaos Space Marines believe that just dedicating their souls to the gods is absolutely not enough. To fully pledge themselves to the service of Chaos, they will allow daemons to possess their bodies and willingly become hosts to these creatures. The possession is said to be agonising, as the daemons will writhe within their new form, sometimes changing it to suit their needs.

The Warhammer 40k traitor legions are best known as the ancient enemy of the Imperium. They have been warped and mutated by the the four daemonic Chaos Gods; Khorne, Tzeentch, Slaanesh and Nurgle. Also known as the Heretic Astartes, they were created during one of the biggest events Warhammer 40,000 history known as the Horus Heresy. Nine legions of Space Marines, all led by Horus the Warmaster, decided to turn against the Emperor of mankind. This act of heresy would unfortunately lead to countless deaths and centuries of endless war.

We highly recommend using the Citadel Plastic Glue and Paints to make these Chaos Space Marines entirely unique. Unleash your creativity and follow the step-by-step guide provided by the Citadel Colour System. Discover the wide and impressive range of paints that have all been designed specifically for Warhammer painting and get started! Once you have finished painting, the Chaos Space Marines are more than ready for the battles of Warhammer 40k! 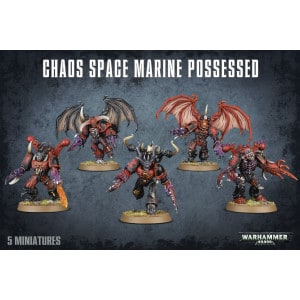 You're viewing: Possessed Chaos Space Marines £19.85
Add to basket
We use cookies on our website to give you the most relevant experience by remembering your preferences and repeat visits. By clicking “Accept”, you consent to the use of ALL the cookies.
Cookie settingsACCEPT
Manage consent