This kit contains all the components required to assemble the Chaos Space Marine Raptors miniatures, each with a range of dynamic poses. Poses include sculpted, perched and taking off from their bases. Protecting the models is their metal-rimmed armour which features the distorting effects of the Warp, such as grills emerging from their shoulder pads, cables coming from their armour and teeth protruding from the rim of the jump packs. These miniatures are carrying bolt pistols and chainswords as they make their way to battle.

The traitor legions of the Chaos Space Marines are the ancient enemy of the Imperium, warped and mutated by the vile energies of the warp and the four daemonic Chaos Gods; Khorne, Tzeentch, Slaanesh and Nurgle. The Heretic Astartes were created during an event in Warhammer 40,000 history known as the Horus Heresy, when nine renegade legions of Space Marines, led by Horus the Warmaster, turned against the Emperor of mankind in an act of heresy that would lead to countless deaths and centuries of endless war.

We highly recommend using the Citadel Plastic Glue and Colour System to assemble and decorate your Raptors! 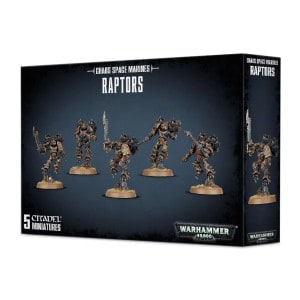 You're viewing: Chaos Space Marine Raptors £20.25
Add to basket
We use cookies on our website to give you the most relevant experience by remembering your preferences and repeat visits. By clicking “Accept”, you consent to the use of ALL the cookies.
Cookie settingsACCEPT
Manage consent