Assemble imposing HQ choice for the Chaos Space Marines with this multipart plastic kit! Armed with thunder hammers and the ability to increase their fighting skills.

This multipart plastic kit contains the components to assemble the Chaos Lord for the Chaos Space Marines. Previously available in the Warhammer Quest: Blackstone Fortress, the Lord is a push-fit miniature with a single pose. This HQ choice for your unique Chaos Space Marines army makes an excellent Warlord option capable of leading your forces. This miniature comes well equipped for close-ranged combat, with a combination of the plasma pistol and thunder hammer, ultimately making him a perfect front-line fighter.

The Lord is a warrior king who strives to bathe in the blood of worlds and bring down entire star systems in name of his patron deities. The champions of disorder are characterised by their ambition and fierce pride and were once noble Captains of the Adeptus Astartes. However, many years of war have completely twisted their souls beyond any possible recovery.

Only the greatest of the Champions of Chaos will qualify to become a Chaos Lord. They are often granted mutations as well as physical alterations from the Ruinous Powers to further their powerful role. Capable of bringing other Chaos forces to their will, they are considered an extremely dangerous position as the advancement is often achieved through the death or murder of their competition with the same goals. 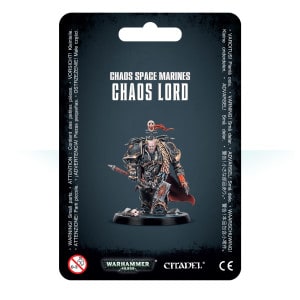 You're viewing: Chaos Lord (Chaos Space Marines) £14.02
Add to basket
We use cookies on our website to give you the most relevant experience by remembering your preferences and repeat visits. By clicking “Accept”, you consent to the use of ALL the cookies.
Cookie settingsACCEPT
Manage consent