Explore the history of spice-trading and become leaders who aim to deliver spices for fame and glory. Race against over players to be the first to complete five demand cards and win Century Spice Road!

Century Spice Road is a game where 3-5 players aged 8 years and over will deliver spices to gain fame and glory. Each player will perform actions such as establishing trade routes, making trades, fulfilling demands and resting. The game continues in rounds until a player has claimed their fifth victory point card.

Enjoy the artwork displayed throughout the game of Century Spice Road, such as the cards, coins and more. Explore history and discover the spice trading road as you collect points and become the winner of the game. However, players will need to be clever as they are limited to ten spices which are portrayed by the cubes. So, will you complete many orders or fewer valuable ones?

Below is a simplified version of how to play:

Here you will find a list of the full components:

How to Play Century Spice Road

Be the first to review “Century Spice Road” Cancel reply 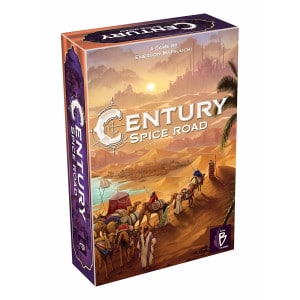 You're viewing: Century Spice Road £22.72
Add to basket
We use cookies on our website to give you the most relevant experience by remembering your preferences and repeat visits. By clicking “Accept”, you consent to the use of ALL the cookies.
Cookie settingsACCEPT
Manage consent