Expand your House Cawdor with a variety of deadly weapons and accessories! All components in this set are compatible with the Cawdor Gang Kit and allow you to personalise your miniatures with alternate heads.

This plastic Necromunda Cawdor Weapons and Upgrades kit is fully compatible with your Cawdor Gang and includes a variety of weapons. Also included are flak armour panels for added protection and 10 heads so you can personalise your fighters!

Upgrade your Cawdor fighters with this selection of deadly weaponry, offering you the chance to create a unique and gang. Also included in this box set is a variety of heads and arms so that you can personalise your gang even further.

Warhammer Necromunda is a popular tabletop war game where players will control the gangs battling in the crime-ridden Underhive. The planet of Necromunda is a hive world full of both factories and mines, all founded during the Dark Age of Technology. This planet also hosts the oldest undercities where gangs will fight until the death without ever witnessing daylight. Necromunda is played in a setting that resembles the hive city with a 3D tabletop layout including multiple story buildings and bridges! 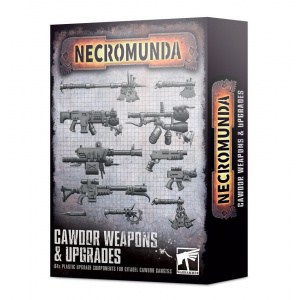 You're viewing: Cawdor Weapons & Upgrades (Necromunda) £11.91
Add to basket
We use cookies on our website to give you the most relevant experience by remembering your preferences and repeat visits. By clicking “Accept”, you consent to the use of ALL the cookies.
Cookie settingsACCEPT
Manage consent