Castles of Mad King Ludwig is a tile-laying game where players must build a castle for the Kind Ludwig II of Bavaria. Players will take on the task of adding rooms to the castles and becoming the Master Builder.

Castles of Mad King Ludwig is a game where 1-4 players aged 13 years or over take it in turns to be the Master Builder. Players will also take on roles as building contractors and add rooms to the castle by purchasing them from the chosen Master Builder.

Master Builders are in charge of replacing all cards and pricing the tiles. They will receive money from other players which they will need to keep for the next round when they become building contractors again. The game will end after several rounds when all buildings have ran out. Those who have reached the King’s demands and have the most popular rooms will score points. Completed rooms will have all entrances connected and the player who has the highest amount of points at the end wins!

Find an overview on how to play Castles of Mad King Ludwig below: 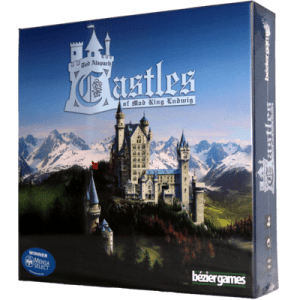 You're viewing: Castles of Mad King Ludwig £42.10
Add to basket
We use cookies on our website to give you the most relevant experience by remembering your preferences and repeat visits. By clicking “Accept”, you consent to the use of ALL the cookies.
Cookie settingsACCEPT
Manage consent