The Castellans are junior officers who assist the Marshals in their usual tasks. Similar to the Lieutenants found in the Adeptus Astartes, they’re also capable of raising hell during close combat too!

The Warhammer 40k Black Templar Castellan functions as Lieutenants for the Chapter. They will help direct their battle-brothers into war and act as  exemplary leaders so they can focus on creating a wider strategic picture surrounding the entire war zone.

Warhammer 40k Black Templars are a Loyalist Second Founding Space Marine Chapter. Their origins trace all the way back to the Imperial Fists’ defence of Terra throughout the Horus Heresy. They are known for being holy warriors who battle to bring the truth of the Emperor to the unconquered worlds.

Based on the artwork by John Blanche, the Castellan brings the firepower effects of a lieutenant to battle. Covered with skulls, wielding both a combi-flamer and a master-crafted power axe, this miniature is perfect for those wanting to add some retro flavour to their new force!

We highly recommend using both the Citadel Plastic Glue and Colour System to assemble and bring your new miniature to life. Discover the wide range of Citadel paints which have all been designed specifically for Warhammer painting and pick out your favourites. Following the steps of the Citadel Colour System you can begin painting your miniature and make them entirely unique to your army. Once primed and ready, introduce the Castellan to all your future games of Warhammer 40k!

Be the first to review “Castellan (Black Templars)” Cancel reply 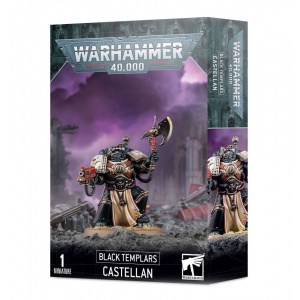 You're viewing: Castellan (Black Templars) £16.76
Add to basket
We use cookies on our website to give you the most relevant experience by remembering your preferences and repeat visits. By clicking “Accept”, you consent to the use of ALL the cookies.
Cookie settingsACCEPT
Manage consent