Cash ‘N’ Guns is a party board game featuring a gangster band that can’t agree on how to split their loot. So, get your guns at the ready as only the richest surviving gangster will win!

Cash ‘N’ Guns is a game where 4-6 players aged 10 years and over will compete for their lives. The goal of the game is to be the richest player after eight rounds while still remaining alive.

The round begins with the chosen Godfather controlling the pace of the game. Players will reveal loot cards and load their guns ready for the countdown to begin. The bluffing game requires decisions to be made, such as whether players will back down or continue to stand.

The party game is guaranteed to cause laughter and fun, the player with the most valuable stash will win the game!

Below is an overview on how to play Cash ‘N’ Guns:

Find the full list of components for Cash ‘N’ Guns below: 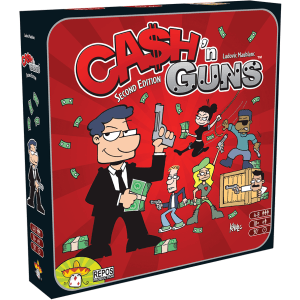 You're viewing: Cash ‘N’ Guns Second Edition £20.95
Add to basket
We use cookies on our website to give you the most relevant experience by remembering your preferences and repeat visits. By clicking “Accept”, you consent to the use of ALL the cookies.
Cookie settingsACCEPT
Manage consent