Play in teams and take on roles including a Captain, First Mate, Radio Operator and Engineer. Players must work together as cooperation is crucial to save your submarine from damage and win the game!

Captain Sonar is a game where 2-8 players aged 14 years or over can become teams in control of submarines. The aim of the game is to track down your enemy and blow them out of the water before they get to you first. To do this, each player is given important roles known as the Captain, First Mate, Radio Operator and Engineer who must work together if they want to achieve success!

Games of Captain Sonar can be played in two different modes, including turn-by-turn play or simultaneous. The game also includes multiple maps with different levels of difficulty so the action never stops. The winners of the game goes to the team with the surviving submarine!

Below is a brief overview on how to play Captain Sonar:

Below you will find a list of the full game components for Captain Sonar:

One for each team:

Be the first to review “Captain Sonar” Cancel reply 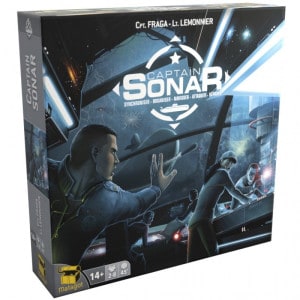 You're viewing: Captain Sonar £29.95
Add to basket
We use cookies on our website to give you the most relevant experience by remembering your preferences and repeat visits. By clicking “Accept”, you consent to the use of ALL the cookies.
Cookie settingsACCEPT
Manage consent