Assemble your unique army of Cadian Shock Troops consisting of 10 Guardsmen for the Astra Militarum! Add some of the best troops to your Warhammer 40k battles and use a variety of weapons, such as the grenade launcher and plasma guns.

Cadian Shock Troops are a trained fighting force joined by millions of soldiers who will fight and die for the Imperium. They stand firm and protect the human race with a steady aim as their opponents fight to survive the incredible blaze of lasfire. Regarded as some of the best troops in the Imperium, they are determined to fight and will teach their children how to shoot a Lasgun before all else.

Astra Militarum is made up of billions of soldiers that come from millions of different worlds. They use strategy and numbers to defeat all enemies of the Imperium as loyal troops of the Emperor. Consisting of both men and women, they will serve as first line of defence and stand against any threat to the human race. The force have sacrificed their lives for ten thousand years in the fight for humanity and will continue to do so.

Use the Citadel Colour System and bring your powerful army of soldiers to life. Assemble and paint your miniatures using simple steps and prime them ready for your future battles of Warhammer 40k!

This kit contains enough components to assemble 10 Cadian Shock Troops. With a total of 32 heads, there is plenty to choose from and are also compatible with other Astra Militarum kits. Options of weapons for the Guardsmen include flamers, grenade launchers, meltagun, plasma gun or the sniper rifle. The Sergeant also has the choice of bolt gun, laspistol, bolt pistol, plasma pistol, bionic arm, power sword and a chainsword.

Assemble your Cadian Shock Troops with the following components: 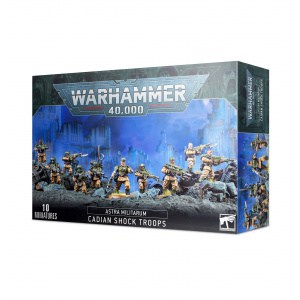 You're viewing: Cadian Shock Troops (Astra Militarum) £23.15
Add to basket
We use cookies on our website to give you the most relevant experience by remembering your preferences and repeat visits. By clicking “Accept”, you consent to the use of ALL the cookies.
Cookie settingsACCEPT
Manage consent