This Cadian Blood paperback by Aaron Demski-Bowden follows the legendary Cadians as they take on the forces of Nurgle in this novel which is part zombie apocalypse, war story and Warhammer action!

This Cadian Blood novel follows the Imperial shrine world of Kathur as its ready to be blighted by Chaos and the brave Guardsmen of Cadia being sent to reclaim it! However, they are soon faced with the walking dead.

Written by Aaron Dembski-Bowden, Cadian Blood is a Black Library classic, pitting the forces of Guardsmen from Cadia against the zombie apocalypse. As the Imperial shrine world of Kathur is being blighted by Chaos, the Guardsmen of the Cadian 88th have been sent to reclaim it. The plague of Nurgle is setting in deeply on the planet and is forcing the Cadians into battle. Within the midst of all this struggle, Captain Parmenion Thade is situated into an unlikely role and is unable to imagine what lies ahead on Kathur, and how the fate of this world will become.

Be the first to review “Cadian Blood” Cancel reply 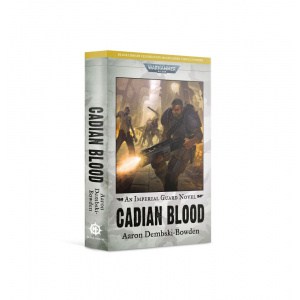 You're viewing: Cadian Blood £6.78
Add to basket
We use cookies on our website to give you the most relevant experience by remembering your preferences and repeat visits. By clicking “Accept”, you consent to the use of ALL the cookies.
Cookie settingsACCEPT
Manage consent