The final book of the Broken Realms Saga is here to introduce you to the Kragnos, the End of Empires. Learn all about his background and updates on the powerful Alarielle and Kroak!

The final book in the Broken Realms Saga, Kragnos, introduces the End of Empires as well as updated warscrolls for Alarielle and Kroak. Kragnos has broken free from an ancient prison and crossed paths with Gordrakk, Fist of Gork. They unite to attack the City of Sigmar, Excelsis and eventually tricked into a portal that could possibly be taking him to the Realm of the Dracoths.

Known as the God of Earthquakes,  Kragnos has spent many years imprisoned underneath a mountain. Thanks to Alarielle the Everqueen, he is now free to strike out across the realms and continue his rampage. With enough force to kill a fully grown dragon, he proudly leads the army of destruction and is ready to cause earth-shaking violence.

Warhammer Age of Sigmar is a fantasy tabletop wargame set in the mysterious Mortal Realms. The magic-filled world is full of both monsters and heroes who battle against each other in the name of either the Grand Alliance of Order, Death, Chaos or Destruction.  Collect, build and paint your very own army of miniatures and discover the Mortal Realms where Gods clash and battle in eternal war. Witness the rise of Kragnos in this must have conclusion for the Broken Realms Saga!

In this 136-page hardback you will find: 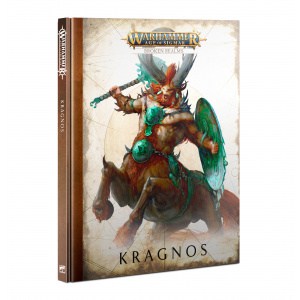 You're viewing: Broken Realms: Kragnos (Hardback) £19.95
Add to basket
We use cookies on our website to give you the most relevant experience by remembering your preferences and repeat visits. By clicking “Accept”, you consent to the use of ALL the cookies.
Cookie settingsACCEPT
Manage consent