Go back in time to the Industrial Revolution and build industries in Brass Birmingham! Compete against your fellow players throughout both the canal and rail eras to score the most VPs!

Brass Birmingham is a strategy board game where 2-4 players aged 14 years or over will build networks and grow industries. This board game is the sequel to Martin Wallace’ 2007 Brass.  Discover the history of Birmingham and the story of competing entrepreneurs during the industrial revolution!

Similar to Brass Lancashire, there is concepts of building Iron, Cotton and Coal industries. Throughout the game players must maintain a close eye on their competitors and take advantage of any connections where possible. Building new factories will help increase the network connections between the cities to sell their goods.

At the end of both the canal and rail era, VPs will be counted and the player with the most overall VPs at the end of the game wins!

Determine rounds of Brass Birmingham are using the turn order track and begin playing turns. Players will receiving two actions they can perform, such as building, networking, developing, selling, taking out loans and taking wild location or industry cards.

Find the full list of game components for Brass Birmingham below:

Be the first to review “Brass Birmingham” Cancel reply 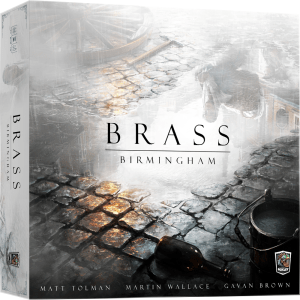 You're viewing: Brass Birmingham £49.10
Add to basket
We use cookies on our website to give you the most relevant experience by remembering your preferences and repeat visits. By clicking “Accept”, you consent to the use of ALL the cookies.
Cookie settingsACCEPT
Manage consent