Feeling brave? Take on the role of hunters and discover the city of Yharnam in this card game based on the hit video game Bloodborne for PlayStation 4.

In Bloodborne: The Card Game, designed by Eric Lang, 3-5 hunters will enter the Chalice Dungeon but only one will escape. Suggested for hunters aged 14 or over, fight against brutal monsters and try to avoid death.

The town of Yharnam is being attacked by a disease spreading uncontrollably and turning people intro beasts. It is your mission to defeat the final boss in 30-45 minutes of competition against your fellow hunters. During Bloodborne the Card Game, you will find powerful weapons to aid in your quest. For example, the cannon inflicts damage to each of the other hunters. Think tactically as players may need to work together to attack monsters, but only one can survive until the end. The hunter to gain the most blood tokens when the game ends wins!

Begin your mission in Bloodborne: The Card Game with our simplified steps:

How to play Bloodborne

Be the first to review “Bloodborne: The Card Game” Cancel reply 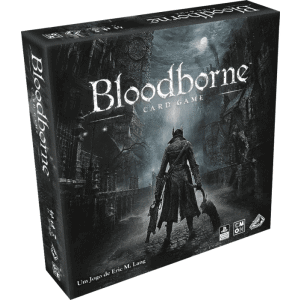 You're viewing: Bloodborne: The Card Game £23.00
Add to basket
We use cookies on our website to give you the most relevant experience by remembering your preferences and repeat visits. By clicking “Accept”, you consent to the use of ALL the cookies.
Cookie settingsACCEPT
Manage consent