Control your very own Viking clan’s leader, ships and warriors in this game of Blood Rage. Here is your chance to invade lands, crush opponents, fulfil quests and secure your place in Valhalla at Odin’s side!

Blood Rage is a war board game where 2-4 players aged 14 years or over will fight to secure a place in Valhalla. Plan your strategy by choosing between cards drafted at the start of each round and be ready to adapt to the opponents strategy as the action unfolds.

Most cards are aligned with a Norse God, an example of this is that Tyr strengthens you in battle. Throughout the game you will be in control of your clan and the actions they take such as invading land, fulfilling quests and crushing opponents. However, winning may not always be the best course of action so be careful with your decisions and never shy away from battle!

Find a simplified version of how to play Blood Rage below:

Find the full list of game components for Blood Rage below:

Be the first to review “Blood Rage” Cancel reply 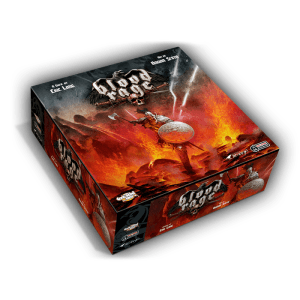 You're viewing: Blood Rage £55.90
Add to basket
We use cookies on our website to give you the most relevant experience by remembering your preferences and repeat visits. By clicking “Accept”, you consent to the use of ALL the cookies.
Cookie settingsACCEPT
Manage consent