Do you miss Blockbuster? Well now there is no need to! The Blockbuster Game is the perfect choice to host your next board game night with lots of different movie genres for you to enjoy.

For all players aged 12 and above, you can take part in the head-to-head movie challenge where two players compete in the movie buzzer battle. To be in for the chance of winning you will need to name as many movies you can think of associated with the theme found on the card. The winner of the battle will get first pick of six movies, choosing just three and handing the rest to the opposing team. The team to complete the most cards wins, and you can start the Blockbuster Board Game all over again!

The Blockbuster Game was released by Big Potato Games for all movie lovers with the aim to keep you and 3 or more friends  entertained for around 20 minutes per game. The easy to learn board game will instantly bring back memories from our time spent in Blockbuster renting our favourite films. Hopefully, you can remember some of those film names and win!

Bring back the entertainment with the Blockbuster Game by following these simple steps:

Included in the Blockbuster Board Game is:

How to Play Blockbuster Game

Be the first to review “Blockbuster Game” Cancel reply 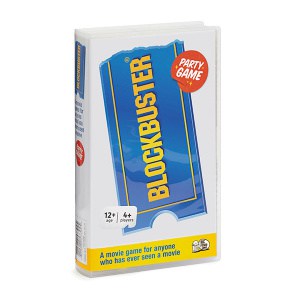 You're viewing: Blockbuster Game £14.04
Add to basket
We use cookies on our website to give you the most relevant experience by remembering your preferences and repeat visits. By clicking “Accept”, you consent to the use of ALL the cookies.
Cookie settingsACCEPT
Manage consent