This kit contains all the components required to assemble the Biologus Putrifier. The once loyal follows of the Emperor now have a new mission, the spread the plague to every corner of the realspace!

This kit contains the necessary components to assemble a Biologus Putrifier. Clad in the rusting armour of the Death Guard, covered in Nurgle symbolism and burn marks clearly shows the impact of past experiments with potions. A huge rack of blight grenades can be seen hanging from his back, covered in plague-filled containers. He is armed with an injector pistol, plague knife and also a breathing apparatus that features a probscis-like extrusion.

The aim of the Death Guard is to spread the Nurgle’s gift to every corner of the realspace. The Biologus Putrifier has a big role in this process, as they must spread the disease by lobbing blight grenades and using their injector pistol. Driven by an obsessive desire to test their theory, they will not hesitate to fire their pistol into the most vulnerable spots such as exposed flesh and eyelenses. The result of this is the victims body being overcome by explosive boils and clouds of flies. Afterwards the injector pistol will be used once again to extract the grossness that now passes for their blood to be used for later study.

Warhammer 40k Death Guard, once known as the Dusk Raiders, are part of the traitor legions of Chaos Space Marines. The once loyal followers of the Emperor, have now been corrupted by the Plague God Nurgle. These marines now rot away within their armour but have the power to become immune to all injuries. 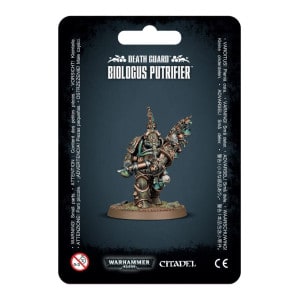 You're viewing: Biologus Putrifier (Death Guard) £13.90
Add to basket
We use cookies on our website to give you the most relevant experience by remembering your preferences and repeat visits. By clicking “Accept”, you consent to the use of ALL the cookies.
Cookie settingsACCEPT
Manage consent