Command your army of Soulblight Gravelords with the ancient vampire Belladamma Volga, First of the Vyrkos. This wielder of deathly magic has the ability to turn her prey into Dire Wolves and command their every move in her favour.

There is little to know about the ancient Soulblight Vampire, Belladamma Volga, but one thing is for certain. Using savage claws and sharp fangs all enemies of Belladamma Volga and her pack will be horribly transfigured. The deadly vampire is a practitioner of magic and has the ability to transform her prey into Dire Wolves ready to join her pack under her command.

Dire Wolves hunt alongside Vampires, treating them as their pack leader. The hunting hounds are driven by hunger and retain their senses so they are able to fight and feed upon the enemy. They often travel in large packs and attack passing farms and villages to feed on travellers and fulfil their cravings.

Soulblight Gravelords are eternally blood thirsty monstrosities that will stop at nothing to please their God, Nagash. They use everlasting strength and unique dark powers to carve a path through the Mortal Realms, raising the unfortunate dead souls to fight alongside them. This way, what they lack in skill is soon made up by large numbers and those killed will be forced to join the opposing side.

Use the Citadel Colour System and bring the deadly creature to life along with her pack of wolves. Choose from a variety of vibrant colours and painting methods designed for all your painting needs and watch the action begin.

TCommand your army of Soulblight Gravelords and discover deathly magic as you bring this miniature to your battles of Warhammer Age of Sigmar! 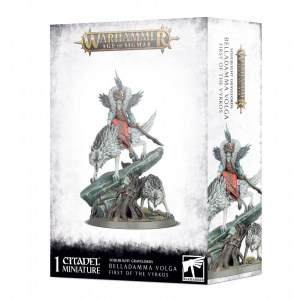 You're viewing: Belladamma Volga First Of The Vyrkos £25.32
Add to basket
We use cookies on our website to give you the most relevant experience by remembering your preferences and repeat visits. By clicking “Accept”, you consent to the use of ALL the cookies.
Cookie settingsACCEPT
Manage consent