This incredible Beastboss kit contains the components for a powerful and hardy HQ choice for your Orks armies. Tear up both tanks and monsters with ease and become the overall leader of the Beast Snaggas mob!

This Beastboss kit includes the overall leader of your Beast Snaggas mob, who is able to crush prey with ease between the teeth of his Beastclaw. As the leader, his job is to direct the mob and interpret the visions of the Wurrboyz.

Due to the uncountable scars and bionic replacements that were earned over battling the most vicious monsters in the galaxy, Beastbosses are incredibly hardy individuals that are able to withstand extreme punishment while they make their way through enemy lines. Their natural authority drives the mob into combat and ignites fury as soon as prey comes within choppa reach.

Warhammer 40k Orks, also known as greenskins, are a hideous and animalistic species that spread like the plague across the Galaxy. This dangerous race is both cruel and cunning, what they may lack in knowledge is soon made up for in brute strength and unpredictability.

We highly recommend using the Citadel Glue and Colour System to assemble and paint your miniature. Unleash your creativity and discover the impressive range of vibrant paints which have been designed specifically for Warhammer painting. One primed and ready, your miniature is more than ready for the endless battles of Warhammer 40k!

Find the full list of components for Beastboss below:

Be the first to review “Beastboss (Orks)” Cancel reply 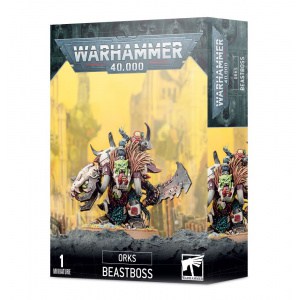 You're viewing: Beastboss (Orks) £18.70
Add to basket
We use cookies on our website to give you the most relevant experience by remembering your preferences and repeat visits. By clicking “Accept”, you consent to the use of ALL the cookies.
Cookie settingsACCEPT
Manage consent