This Ork Beast Snagga Boyz kit contains the components to assemble 10 strong troops for your Ork army. Their scarred appearance reveals their lifetime spent wrangling beasts and battling the largest foes they can possibly find. Taking to the battlefield on foot in numbers of mobs, violence is guaranteed towards all their enemies.

The troops are perfect for advancing across the battlefield and ploughing directly into their opponents. The Boyz will be armed with both sluggas and choppas, while one is assembled as the Nob unit leader armed with a power snappa. There is also has the option of one being built with a thump gun, which is a weapon that fires explosive cannonball-like shells into enemy ranks.

Warhammer 40k Orks are well known for being a brutal, animalistic species that has spread like a plague across the Galaxy. This dangerous xeno race are both violent and cruel and whatever they lack in intelligence, they make up for in strength and unpredictability.

These miniatures require both assembly and painting. We highly recommend using the Citadel Glue and Paints to bring these miniatures to life. Unleash your creativity and discover the incredible range of paints which have all been designed to suit your Warhammer needs. Once primed and ready, use them in all future battles of Warhammer 40k! 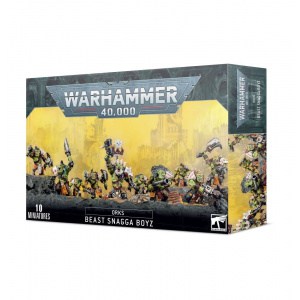 You're viewing: Beast Snagga Boyz (Orks) £25.01
Add to basket
We use cookies on our website to give you the most relevant experience by remembering your preferences and repeat visits. By clicking “Accept”, you consent to the use of ALL the cookies.
Cookie settingsACCEPT
Manage consent