This Idoneth Deepkin Battletome features all the lore and rules you require to bring them to the tabletop. Including traits for different Enclaves as well as Path to Glory rules!

This Idoneth Deepkin Battletome contains all you need to know about the soul-raiders of the sea, able to command the power of the creatures of the ocean. Uncover information about the Deepkin and the nature of their curse, all while exploring their mystifying world.

Idoneth Deepkin, created by Teclis, live in enclaves found in the depths of the Mortal Realms’ oceans. They prey on those along the coast and are known to be cruel raiders with a particular grudge against the devotees of Slaanesh. Warhammer Idoneth Deepkin fight for the Grand Alliance of Order. However, their alliance is fragile at best as they have raided humans, aelves, and Sylvaneth without mercy. During battle, the Deepkins summon a magical ocean so they can bring sea-beasts alongside them to fight!

Be the first to review “Idoneth Deepkin Battletome” Cancel reply 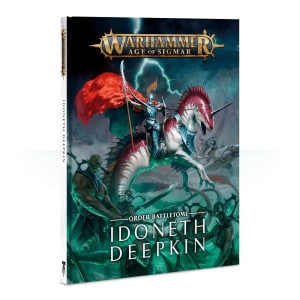 You're viewing: Idoneth Deepkin Battletome £25.80
Add to basket
We use cookies on our website to give you the most relevant experience by remembering your preferences and repeat visits. By clicking “Accept”, you consent to the use of ALL the cookies.
Cookie settingsACCEPT
Manage consent