This re-implementation of the 2002 Bang! Card Game is shorter, snappier and much more exciting. This wild west elimination game requires secret teams now using dice rather than cards!

Bang The Dice Game is a game where 3-8 players aged 8 years or over will compete in teams to meet their winning conditions. The Dice Game is a re-implementation of the card game from 2002. The game still features the wild west shootout with a sheriff that struggles to remember who the loyal Deputy is. This version now uses dice rather than cards to see who is fortunate enough to survive.

Games are now shorter and much more exciting as players are assigned unique characters with secret roles. There are four roles in the game known as Sheriff, Outlaw, Deputy and Renegade. The Sheriff and Deputies will win if they manage to outlive the Outlaws and Renegades. However, the Outlaws will win if the Sheriff does die and the Renegade will wins if they happen to be the last player standing.

Each player will receive a character card that grants them with a special power in the game. The chosen Sheriff will reveal his role card and then take the first turn of the game.

On their turn, a player will roll the five dice between one and three times. Use the results of these dice and shoot neighbouring players. To increase the range of your shots, heal your life points or enter the range of the Indians represented by nine tokens in the centre of the playing area.

Every time a player rolls an arrow they will take a tokens, once the final token has been taken every player will lose one life point for each token they holds. The game continues until a team meet their winning condition!

Find the full list of game components for Bang The Dice Game below:

Be the first to review “Bang The Dice Game” Cancel reply 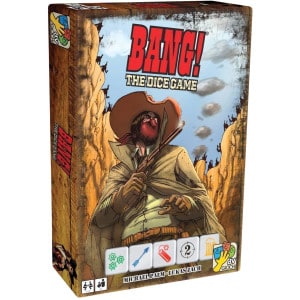 You're viewing: Bang The Dice Game £14.45
Add to basket
We use cookies on our website to give you the most relevant experience by remembering your preferences and repeat visits. By clicking “Accept”, you consent to the use of ALL the cookies.
Cookie settingsACCEPT
Manage consent