Go back in time to Spring 1942 where the world is facing war. This time it’s the axis Germany and Japan up against the allied United Kingdom, Soviet Union and the United States and its your turn to decide who wins!

Axis and Allies 1942 2nd Edition provides for 2-5 players aged 12 years or older to change history as we know it. Plan attacks, command forces and resolve conflicts in this strategy board game!

The game is based on World War 2 which lasted from 1939 to 1945 and included the majority of the worlds countries. This second edition includes an expanded board game, changes in rules and new sculpts to keep the action going. Control your armies using dice rolls and capture the enemy in order to succeed.

Each round will involve players taking it in turns to complete their objective. They must decide how much they are willing to spend and how they wish to move. Money can be spent to purchase more units, improve them or repair. There is multiple types of combat including bombing raids, anti-aircraft defense and more to keep the game entertaining!

Below we have provided a brief overview on how to play the tabletop war game: 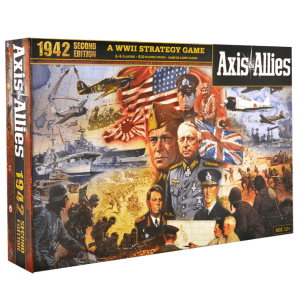 You're viewing: Axis & Allies 1942 (2nd Edition) £46.50
Add to basket
We use cookies on our website to give you the most relevant experience by remembering your preferences and repeat visits. By clicking “Accept”, you consent to the use of ALL the cookies.
Cookie settingsACCEPT
Manage consent