This set contains all the components to assemble the Asuryani Phoenix Bomber Squadron. Phoenix Bomber is a Aeldari strike craft which carries a ground-attack payload. The Bomber is shockingly fast and agile making it capable of engaging both air and ground forces!

The Phoenix Bomber is a heavily armed craft that was utilised by the Craftworld Aeldari. They carry a payload which is tailored towards ground attack missions. However, despite these modifications the craft still remains fast and is capable of engaging in both air and ground forces. These crafts are great tools to include in the Asuryani air war.

While most bombers known for being large and tough, the Phoenix Bomber is the opposite. With the same structural qualities as your typical fighter, it hugely relies on both speed and maneuverability to find it’s way out of tight spots. Meanwhile, the customisable payload means they are able to excel in a wide variety of missions. The missile array can also be exchanged for the specialised plasma and krak missiles to help target your aerial and ground targets. They can also be fitted with twin bright lances, twin starcannons or even twin pulse lasers on top of the standard cannon and bomb rack armaments.

Find the rules for using these miniatures in the Wrath of Angels Starter Set. 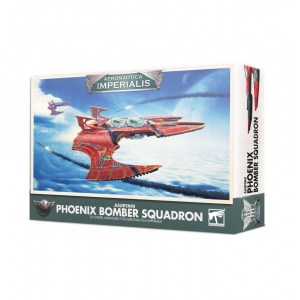 You're viewing: Asuryani Phoenix Bomber Squadron £20.64
Add to basket
We use cookies on our website to give you the most relevant experience by remembering your preferences and repeat visits. By clicking “Accept”, you consent to the use of ALL the cookies.
Cookie settingsACCEPT
Manage consent