This kit contains all the components to assemble the Asuryani Nightwing Squadron. The Nightwing has a extraordinary level of speed and manoeuvrability and will weave around enemy aircraft during battle. They will tear the foe apart using bursts of fire from their own shuriken cannons and bright lances.

The primary aircraft was employed by the enigmatic xenos best known as the Craftworld Aeldari, Nightwing fighters posses a level of speed and manoeuvrability that appears beyond normal. Throughout battle, the squadrons of Nightwings will weave around the enemy aircraft, tearing their foe apart using bursts of fire from their shuriken cannons and bright lances.

The Asuryani air fleet consists of intensely fast, hard-hitting but fragile aircrafts. Nightwings have all these features, with the speed and maneuverability to avoid the line of fire and the ability to set up a tailing position so they can unleash devastating firepower.  However, at close range their shuriken cannon comes to use and makes quick work of targets while any additional weapons complete a variety of roles. Twin bright lances will extend their range, twin scatter lasers add a short-range punch, twin missile launchers help punish ground assets and the twin starcannons are great for finishing off aircrafts. With six of these incredibly sleek fighters in just one box, you will prepared for any opponent.

Find the rules for using these miniatures in the Wrath of Angels Starter Set. 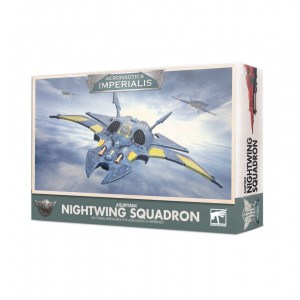 You're viewing: Asuryani Nightwing Squadron (Aeronautica Imperialis) £20.64
Add to basket
We use cookies on our website to give you the most relevant experience by remembering your preferences and repeat visits. By clicking “Accept”, you consent to the use of ALL the cookies.
Cookie settingsACCEPT
Manage consent