Warhammer 40k Sisters of Silence form part of the Imperial Guard as an all female order of Witch Hunters. They hunt down all psychic threats to the galaxy and are armed with incredible Umbra-pattern Bolters to aid them through battle!

Sisters of Silence are armed with powerful Umbra-pattern bolters and specialise in long-range combat. They are an all female order that hunt down rogue psykers or any psychic threat across the galaxy. The Witch Hunters help enforce laws regarding the use of psychic powers and were once the militant arm of the Adeptus Astra Telepathica.

Astra Militarum, also known as the Imperial Guard, is an army of billions of soldiers from millions of different worlds. Their overwhelming numbers come to use when going up against all enemies of the Imperium and without them mankind would no longer exist. For ten thousand years they have sacrificed their lives and serve as the first life of defence in the fight for humanity.

Get creative and paint this incredible army using the Citadel Colour System which has been designed for painting Warhammer miniatures. Choose from a large range of vibrant colours and prime your army ready for future battles of Warhammer 40k!

This kit contains the necessary components to assemble a Prosecutor Squad of 5 with one having the option to be built as a Sister Superior. However, they can also be assembled as Vigilators who carry executioner greatswords and Witchseekers who carry flamers.

Find the full list of components for Sisters of Silence below:

Be the first to review “Sisters Of Silence” Cancel reply 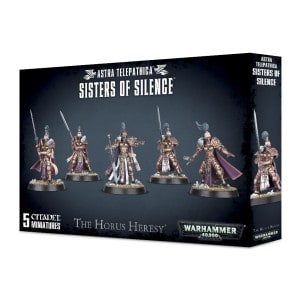 You're viewing: Sisters Of Silence £23.82
Add to basket
We use cookies on our website to give you the most relevant experience by remembering your preferences and repeat visits. By clicking “Accept”, you consent to the use of ALL the cookies.
Cookie settingsACCEPT
Manage consent