The year is 1926, and it is the height of the Roaring Twenties. Flappers dance till dawn in smoke-filled speakeasies drinking alcohol supplied by rum runners and the mob. It’s a celebration to end all celebrations in the aftermath of the war to end all wars.

Yet a dark shadow grows in the city of Arkham. Alien entities known as Ancient Ones lurk in the emptiness beyond space and time, writhing at the gates between worlds. These gates have begun to open and must be closed before the Ancient Ones make our world their ruined domination.

Only a handful of investigators stand against the Arkham Horror. Will they Prevail?

Arkham Horror Third Edition, the next evolution of the classic cooperative board game of cosmic horror for one to six players. Originally developed in 1987 by Richard Launius and re-released by Fantasy Flight Games in 2005, Arkham Horror has long been synonymous with thrilling, thematic, cooperative board gaming. Now, we invite you to return to the Lovecraftian-inspired nightmare again—or visit it for the first time!—with a modern take on the classic game.

Arkham Horror Third Edition sees players taking on the roles of investigators in the bizarre town of Arkham, Massachusetts. Unspeakable evil waits in the space between moments and just past the veil of our existence, and investigators must work together to unravel the mysteries of the Ancient Ones, risking their lives and sanity along the way.

As the wall against the encroaching darkness, Arkham Horror Third Edition features twelve iconic investigators, each prepared, in their own way, to defend the world. Each investigator not only comes with a unique ability, but also a customizable starting kit, letting you choose how you want to outfit your investigator for the coming game. And ultimately, each investigator has their own history, and their own reasons for investigating the horrors of Arkham.

Each game of Arkham Horror Third Edition sees you and your friends exploring one of four different scenarios in the dark and deadly town. Each adventure brings your investigators to the edge of their sanity and beyond.

These scenarios see a race between the investigators desperately searching for clues across the city, and the forces of evil spreading doom to further their cause. Finding clues can advance the narrative of each scenario, inching you closer to victory. Spreading doom not only produces effects that will hinder you, but can lead to a very different conclusion… one where the world isn’t so fortunate.

While this push and pull between uncovered clues and impending doom will often determine how the narrative advances, other factors can come in to play, including choices made by the players. The fate of the world is in your hands. Do you have what it takes to succeed? 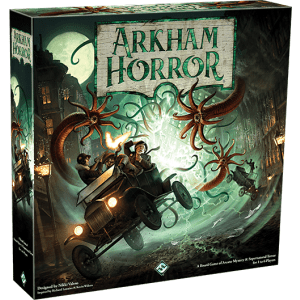 You're viewing: Arkham Horror (Third Edition) £46.65
Add to basket
We use cookies on our website to give you the most relevant experience by remembering your preferences and repeat visits. By clicking “Accept”, you consent to the use of ALL the cookies.
Cookie settingsACCEPT
Manage consent