This  Area of Engagement: Outer Reaches gaming board features two remote locations with 342 playable hexes. Featuring the same theme as the starter set with a lunar imperial outpost on one side and volcanic terrain on the other!

This incredible box set contains the Area of Engagement: Outer Reaches game board. Although there’s already a double-sided mat in the Wrath of Angels Starter Set, everyone likes variety and this is a great addition! This gaming board continues the theme by featuring a lunar imperial outpost on one side and volcanic terrain on the other. It comes in two halves with 342 playable hexes.

This fold-out game board for the Aeronautica Imperialis represents two different locations for your air fleets to come to grips. Measuring 19 hexes by 18 hexes, this game board offers you a huge area over in which you can fight your battles. Side one of the game board Imperial Outpost features a remote colony based on a world claimed by the Imperium. This includes research facilities, refueling stations and settlements. Side two is a Lava World to prove that most plants work for the Imperium. This includes an Imperial settlement which is surrounded by lava and dangerous lands making air combat crucial when fighting for control of this planet.

To use this game board a copy of either the Taros Air War, Rynn’s World Campaign Book, Wrath of Angels, Skies of Fire or Wings of Vengeance.

Be the first to review “Outer Reaches: Area of Engagement” Cancel reply 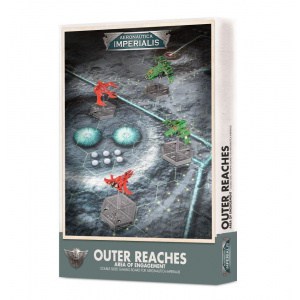 You're viewing: Outer Reaches: Area of Engagement £20.64
Add to basket
We use cookies on our website to give you the most relevant experience by remembering your preferences and repeat visits. By clicking “Accept”, you consent to the use of ALL the cookies.
Cookie settingsACCEPT
Manage consent