This multipart plastic kit contains the components necessary to assemble one Archon clad in Kabalite armour. The miniature is armed with a husk blade and splinter pistol, also featuring a cloak of skin and a trophy rack which proudly displays the horror he has reaped in battle. The masters of the Drukhari Kabals are known for being monstrous and wielding the power to destroy civilisations.  They will feed upon the pain they cause and continue to lead raids against the realspace.

The true lords of Commorragh form part of the hierarchy who control the Dark City and the Drukhari portion of the Webway. Just one false move from them could be fatal, so they must have the ability to predict all motives of their enemy and trap them in horrifying ways.  The Warhammer 40k Drukhari, also referred to as the Dark Eldar, are a highly advanced yet ancient alien race. The chapter is unique and well known for living on the Dark City of Commorragh rather than a settled world. Consisting of mostly slaves and pirates, they will prey on targets all over the galaxy and prepare to strike!

We highly recommend using the Citadel Plastic Glue and Colour System to assemble and bring your new miniature to life. Simply follow the steps and discover the impressive range of Citadel Paints!

Be the first to review “Archon (Drukhari)” Cancel reply 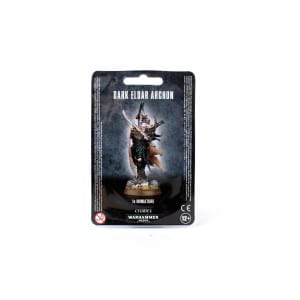 You're viewing: Archon (Drukhari) £13.97
Add to basket
We use cookies on our website to give you the most relevant experience by remembering your preferences and repeat visits. By clicking “Accept”, you consent to the use of ALL the cookies.
Cookie settingsACCEPT
Manage consent