Get creative and build your dream Arboretum in this strategy card game. Plays will compete to score the most points by creating beautiful garden paths in a variety of colours!

Arboretum is a family board game where 2-4 players aged 8 years ad over will build the Arboretum of their dreams. The strategy card game combines hand management and tile-laying with the average game lasting about 25 minutes. Players will compete for the most points by creating garden paths of different colours!

The game consists of placing trees in orthogonal, ascending order on your grid. Tree types don’t always need to be identical, however, the first and last tree in a garden path must be the same.

Players start games of Arboretum with seven cards in hand. During each turn, a player will draw two cards and lay a card on the playing area to form part of their Arboretum. The other card will then be added to their personal discard pile.

Once the deck is exhausted, players will compare the cards remaining in their hands and determine who can score a colour. The players holding the highest value of cards in that colour will earn a path of trees in their arboretum.

Players will add up their points depending on their tree paths and colours. The player with the highest amount of points will them become the declared winner!

Find the full list of game components for Arboretum below:

Be the first to review “Arboretum” Cancel reply 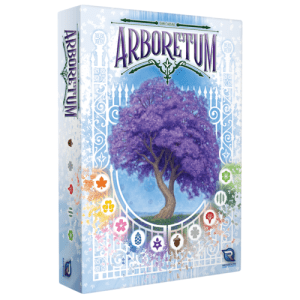 You're viewing: Arboretum £13.00
Add to basket
We use cookies on our website to give you the most relevant experience by remembering your preferences and repeat visits. By clicking “Accept”, you consent to the use of ALL the cookies.
Cookie settingsACCEPT
Manage consent