Ankh: Gods of Egypt is an extremely competitive game where 2 to 5 players will go head to head. Players must fight to earn the love of the people, as only one god will remain!

Ankh: Gods of Egypt introduces the ancient Egyptians who worshipped many gods. However, as times are changing the number of population who continue to worship gets smaller and smaller, with them melding gods together and just focusing their admiration on a select few. The gods are sensing what is happening and are now fighting among themselves in order to become the one god that the population adores. Only one will be worshipped and the rest will be forgotten.

This game is recommended for 2-5 players aged 14 years or over, with the average game lasting approximately 60 minutes.

In games of Ankh: Gods of Egypt, players will each take on the role of a god of ancient Egypt. They will have to compete against each-other to earn followers. To do this they will need to dedicate monuments to their worship, recruit great monsters,  divide the desert with trade routes and fight to gain the love of the people. In the end, only one god will remain!

Be the first to review “Ankh: Gods of Egypt” Cancel reply 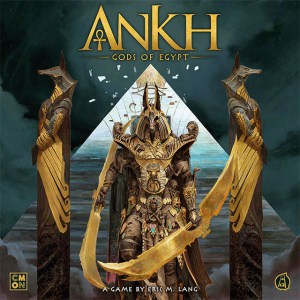 You're viewing: Ankh: Gods of Egypt £72.95
Add to basket
We use cookies on our website to give you the most relevant experience by remembering your preferences and repeat visits. By clicking “Accept”, you consent to the use of ALL the cookies.
Cookie settingsACCEPT
Manage consent