Ambot Automatas make a great addition to any gang of Necromunda. Players can get creative and customise them using a variety of heads, poses and weaponry!

The Ambot Automata is a heavy mining construct that is based on the Ambull xenos creatures which are common to hot worlds. The automata are mainly used for ash excavation and slag mining, though there is always an underhive gang wanting to use them as a weapon against their rivals.

The cybernetic construct completes its duties across the imperium of man and shares the same central nervous system as the Ambull. Their instinct for tunneling comes in great use when finding new deposits of the valuable ores. Each and every Ambot has been implanted with cortical limiters in order to reduce how aggressive they are and prevent them from escpaing.

Warhammer 40k Necromunda is a hive world consisting of the factories and mines founded during the Dark Age of Technology. This planet is host to the oldest undercities where gangs will fight until their death. Players will control their gangs and battle in the crime-ridden Underhive full of violence. This helps to gain experience, members and equipment all while fighting in the heavily polluted environments. The tabletop wargame is played in a setting resembling the hive city using a 3D tabletop layout which includes multiple story buildings and bridges.

Find the full list of components for Ambot Automata below:

Be the first to review “Ambot Automata (Necromunda)” Cancel reply 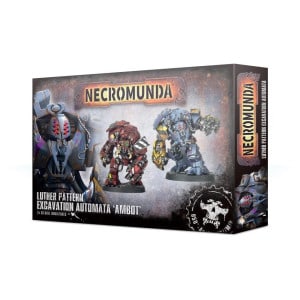 You're viewing: Ambot Automata (Necromunda) £20.75
Add to basket
We use cookies on our website to give you the most relevant experience by remembering your preferences and repeat visits. By clicking “Accept”, you consent to the use of ALL the cookies.
Cookie settingsACCEPT
Manage consent