Alien: Fate of the Nostromo

Alien: Fate of the Nostromo is a fully cooperative strategy game based on the 1979 film. Whether playing with a group of classic board gamers, Alien fans or just your family, this is the perfect game for you!

In games of ALIEN: Fate of the Nostromo, players will take on the roles of Nostromo crew members known as Ripley, Lambert, Parker, Brett, and Dallas. Throughout the game players will need to collect scrap, craft items, and fulfill multiple objectives. However, the crew will both lose and gain morale if they encounter the Alien and if crew morale reaches zero, then players lose the game.

This game is recommended for 1-5 players aged 10 years and over.

Alien Fate of the Nostromo Gameplay

Each turn of the game has two phases. During the Crew Action phase, players will need to creep through the Nostromo’s halls while gathering scrap, crafting items, trading with other players and using special abilities. For example, Brett is able to craft items with one fewer scrap than all the other players. If the Alien happens to be within three spaces of the player who has the incinerator, that player will then use it to send the Alien to its nest.

For the Encounter phase, players will draw and resolve Encounter cards. When the players have fulfilled their initial objectives, they will complete one of five final missions, all with a unique set of requirements. If players fulfill these requirements simultaneously, they win the game!

Be the first to review “Alien: Fate of the Nostromo” Cancel reply 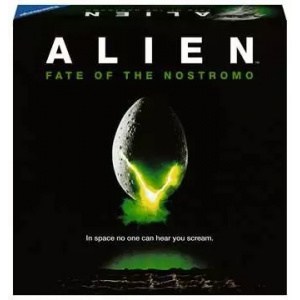 You're viewing: Alien: Fate of the Nostromo £27.50
Add to basket
We use cookies on our website to give you the most relevant experience by remembering your preferences and repeat visits. By clicking “Accept”, you consent to the use of ALL the cookies.
Cookie settingsACCEPT
Manage consent