Mandrake root, scorpion tail, spongy mushroom and warty toad are all strange ingredients found in Alchemists. Players will need to find out the secrets hidden in the ingredients by mixing their potions and drinking them!

Alchemists is a game where 2-4 players aged 13 years or over will compete to unleash the secrets of their mystical art. Points will be earned in multiple ways, such as publishing theories but they must be correct!

Find out the secrets by mixing ingredients to create potions and drink them to reveal their effects. There is also the option to play it safe and take on a helpful assistant to test out your potions. Players will earn their riches by selling their potions to wandering adventurers and by investing in powerful artifacts. Knowledge and reputation will soon grow, allowing your theories to be published for all to see!

Alchemists plays in six rounds and each player will declare their options by placing cubes on the action space of their choice. Mixing ingredients helps players to gain knowledge and they can test their results using the compatible mobile app. There is also the option to purchase magical artifacts for ore special potions. Players will sell these potions to earn both money and respect from others.

Throughout the game players reputations will go both up and down. After six completed rounds and a final exhibition, players reputation will be converted into points based on whether their theories are correct. The player with the most point at the end of the game wins!

Find the full list of game components for Alchemists below:

Be the first to review “Alchemists” Cancel reply 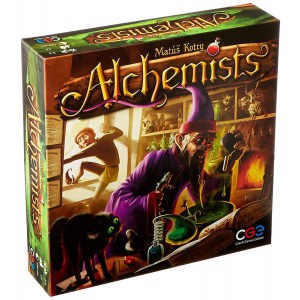 You're viewing: Alchemists £27.33
Add to basket
We use cookies on our website to give you the most relevant experience by remembering your preferences and repeat visits. By clicking “Accept”, you consent to the use of ALL the cookies.
Cookie settingsACCEPT
Manage consent