Age of Sigmar: Core Book is the essential book for all fans of Warhammer Age of Sigmar. Discover the history and learn all about open, matched and narrative play!

Age of Sigmar: Core Book is a 360-page hardback book containing all you need to know to build, paint, collect, and play with incredible miniatures in the Mortal Realms.

Warhammer Age of Sigmar started with the arrival of Stormcast Eternals,  the golden warriors who are thrown into battle against those who would destroy the Mortal Realms.

While Sigmar strives for success, the Great Necromancer Nagash commands the forces of Death to claim every soul. On the other hand, Kragnos directs the forces of Destruction on a rampage while the Chaos Gods get ready to conquer. Featuring many mighty battles and never-ending war, this is Warhammer Age of Sigmar!

Delve into the history of the Mortal Realms found in the first lore section. This book covers three major ages known as The Age of Myth, Chaos and Sigmar. There is also background information on all eight of the Mortal Realms including Shyish, Azyr, Chamon, Ashqy, Ghyran, Ghur and Ulgu.

There is three types of games including Siege Warfare, Tunnel Fighting and Triumph and Treachery. This core book also features a rules index, Path to Glory roster, Army roster and Order of Battle copies.

Populated by powerful heroes and monsters, It plays host to the wars between the forces of Order, Death, Chaos and Destruction. Discover the rich history and all the rules needed to play on the tabletop with this Age of Sigmar: Core Book:

Be the first to review “Age Of Sigmar: Core Book (English)” Cancel reply 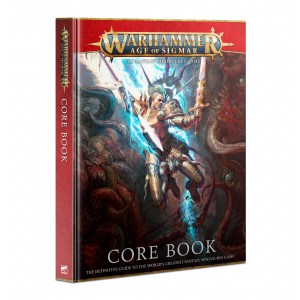 You're viewing: Age Of Sigmar: Core Book (English) £34.95
Add to basket
We use cookies on our website to give you the most relevant experience by remembering your preferences and repeat visits. By clicking “Accept”, you consent to the use of ALL the cookies.
Cookie settingsACCEPT
Manage consent