Begin your games of Adeptus Titanicus with this incredible The Horus Heresy starter set! Including six new spectacular miniatures for you to personalise and take to battle.

Adeptus Titanicus Starter Set: The Horus Heresy is a perfect starting set for the game. Including six miniatures, rulebook, dice and everything you need to join the battle for the future of humanity!

Adeptus Titanicus is a tabletop game where two or more players will compete in devastating combat using huge Titans. The colossal war engines are covered by thick armour and armed with extremely powerful weaponry. Command your unique titans and take on the battles from the Horus Heresy, full of many suprising moments and epic twists. Take down the enemy war machines and command the powerful and earth shattering weaponry to find success!

Games of Adeptus Titanicus are set in the world of Warhammer 40k during The Horus Heresy. The game features it’s own unique war machines of a much bigger scale than the usual Warhammer models. So get creative and use the Citadel Colour System to ready them for battle! 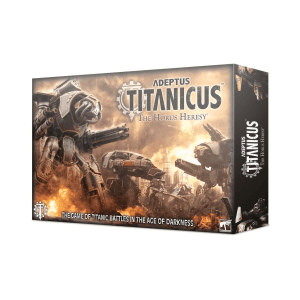 You're viewing: Adeptus Titanicus Starter Set: The Horus Heresy £77.90
Add to basket
We use cookies on our website to give you the most relevant experience by remembering your preferences and repeat visits. By clicking “Accept”, you consent to the use of ALL the cookies.
Cookie settingsACCEPT
Manage consent