Introduce the Reaver Titan to your games of Adeptus Titanicus. The highly detailed titan has a wide range of weaponry including melta cannons, volcano cannons, chainfist and more!

Reaver Battle Titan with Melta Cannon and Chainfist is the perfect addition to battlegroups and is easily recognisable by its flattened face and angular carapace. This highly-detailed titan is swifter and more durable than smaller Warhounds and is armed with a wide range of weaponry. Weapon options include a melta cannon, volcano cannon, chainfist and a turbo laser destructor.

Adeptus Titanicus is a wargame where two or more players will compete using epic scale titans. Command your very own legion of titans and relive the battles and epic moments from the Horus Heresy with the Warhammer 40k setting. Battle against towering war machines by using the wide range of earth-shattering weaponry, which can be personalised to suit your strategy.

The Reaver Titan is known to be one of the most destructive classes of Battle Titan. Armed with devastating weapons and the abilty to crush enemies under its tread, the enemy of the Reaver is left with a choice to either flee or die. Reavers are at the heart of the Titan Legions, either holding the line or leading the charge.

We recommend using the Citadel Colour System to bring this aggressive looking titan to life. Decide on a painting method and choose from a huge range of paints made specifically for Warhammer painting. Once ready, include your new Reaver in games of Adeptus Titanicus!

Find the full list of components for Reaver Battle Titan below: 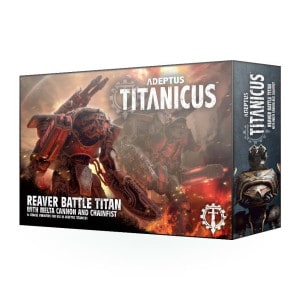 You're viewing: Reaver Battle Titan: Adeptus Titanicus £27.79
Add to basket
We use cookies on our website to give you the most relevant experience by remembering your preferences and repeat visits. By clicking “Accept”, you consent to the use of ALL the cookies.
Cookie settingsACCEPT
Manage consent