Add  a key selection of 15 miniatures to your Warhammer 40k collection with the Adeptus Mechanicus Combat Patrol. This set contains Tech-Priest Enginseer, Onager Dunecrawler, Kataphron Destroyers and Skitarii Rangers, the perfect selection to get you started and save you money!

The Adeptus Mechanicus Combat Patrol brings you the manufacturers of technology for the Imperium and the masters of technological secrets. The powerful army are followers of the Machine God and believe creatures that embody knowledge are holy.

The Tech-Priest Enginseer specialises in the maintenance of technological instruments of the Imperium. They are a common sight on battlefields and are highly trained members that are dedicated to making repairs on aircrafts, starships and other wargear. Although it’s not a part of their role, the Tech-Priests are able to lead an army of the Machine God to war.

Onager Dunecrawlers are combat walkers used by the Skitarii Legions during battles of Warhammer 40k. Enemies have good reason to fear, as the heavy walker brings great destruction while gathering data for the masters at the same time. Regarded as protected by the Machine God, the engine is well equipped with weapons and firepower which can blast apart aircrafts and punch holes through the enemy battle engines.

Kataphron Destroyers are a type of battle servitor used only by the Adeptus Mechanicus. The large and powerful machines are controlled by Tech-Priests and are equipped with large amounts of weaponry. This includes Phosphor Blasters, Flamers, Plasma Culverins and Grav Cannons, they are also equipped with armour that allows for cooling of the weapons.

Skitarii Rangers relentlessly stalk the enemy across the galaxy, even if it takes decades to do so. To help them do so their legs have been replaced by cybernetic augmentations so they can hunt the enemy to exhaustion. They are armed with a variety of weapons and are usually led by an Alpha.

The Adeptus Mechanicus Combat Patrol is the perfect starter kit for your army and can also be used to expand collections you may already own. 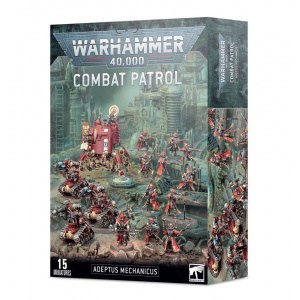 You're viewing: Adeptus Mechanicus Combat Patrol £67.49
Add to basket
We use cookies on our website to give you the most relevant experience by remembering your preferences and repeat visits. By clicking “Accept”, you consent to the use of ALL the cookies.
Cookie settingsACCEPT
Manage consent